The importance of detecting skin infections

At the San Román Clinic we carefully assess any alterations to the nails and the foot as a whole. Skin infections that mainly affect the feet are:

Paronychia: an infection that surrounds the nail and causes inflammation (pain, swelling and redness of the skin and even pus) and destruction of the cuticle. It can be of acute origin, usually bacterial (S. Aureus and Streptococcus), or chronic, caused by fungi (mainly Candida) and sometimes by mixed infections. It is often the result of an ingrown toenail. Treatment is extensive and may include drainage of pus, treatment with antibiotics or antifungals, and other conservative measures, depending on the source. Occasionally, surgical removal (extirpation) of the nail may be necessary.

Onychomycosis: the most frequent infection of all. It consists of an infection of the nail by fungi (mould, dermatophytes or Candida). The appearance of the nail in this case is different, and it causes changes in color, thickening and flaking, as well as fragility. 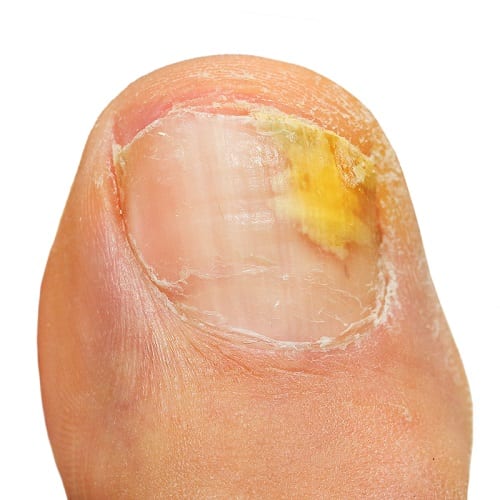 Dermatophyte infection: Skin fungi can affect any part of the body, and the most common sites are the feet (ringworm of the foot known as athlete’s foot) and nails (ringworm of the nail). Athlete’s foot has maceration, fissures and interdigital (i.e. between the toes) flaking.

Who suffers from them and how do they contract? 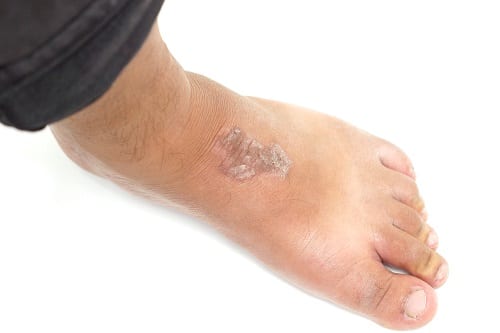 Fungal infections are very common and their incidence is increasing due to factors such as old age, diabetes, peripheral vascular disease (poor circulation in the legs) and other diseases that condition a state of immunosuppression, but above all it is due to everyday factors such as exposure to damp and warm environments such as swimming pools, showers and changing rooms in sports and leisure facilities, where these infectious agents usually grow. The route of infection can come from human, animals and soil. Onychomycosis is more common in men and is also related to the use of non-breathable footwear due to the humidity that can be generated.

Clínica San Román
4.8
Based on 20 reviews
See all reviewsWrite a review

Stellina Brands
01:29 12 Feb 21
Great clinic, I had a foot operation at both feet and it went perfect from beginning until the end. I came from Holland to here and just went there 2 times and didn’t had any complications or pain. Now we are 3 months further and my feet are as new and I didn’t had to stay home at all and could walk from the first minute. After 2 weeks I start with gym already!!! Great job and great team...thank... you all!!!! Adios Stellinaread more

Steve Haselum
19:01 16 Feb 20
I came to Alicante as I had heard from a friend who had surgery many years ago at clinica San Román. I had been suffering with bunion pain for a while and had sought advice on how best to treat it. I had doubted surgery but after an examination and detailed discussion, I was put at ease by the surgeons and decided that the best course of action would be to have the bunion removed. They were... extremely efficient and were able to provide surgery within a month. I was awake throughout the procedure and was still able to converse with the friendly staff. I was able to walk out of surgery without any pain. I am very happy with the whole treatment plan and the professional staff of the clinic.read more

Peter Baldwin
10:48 29 Oct 18
I have a complex problem with the balls of my feet..requiring Skilled Podiatry treatment..I could not wish for better standards and treatement than at San Ramon..Am quite certain even the most discerning will be more than happy..

Diane Wood
16:50 26 Jun 16
I'm a very satisfied patient that previously suffered from constant pain in the ball of both feet. After simple 'walk in, walk out' surgery, I can now walk miles/kilometres pain free. Their technics are no other better describes as miracles! Thank you to all the very kind and helpful staff at San Román Clinic.

Jean-Philippe Prénovost
10:16 03 Jul 15
My wife had a procedure performed at this clinic and received excellent care and attention. More importantly, it resolved a long-standing foot issue which she had struggled with for years.

Gina Prénovost
16:46 21 May 15
Great professionals. Customer attention superb. Very pleased with my experience. I will recommend without a doubt.